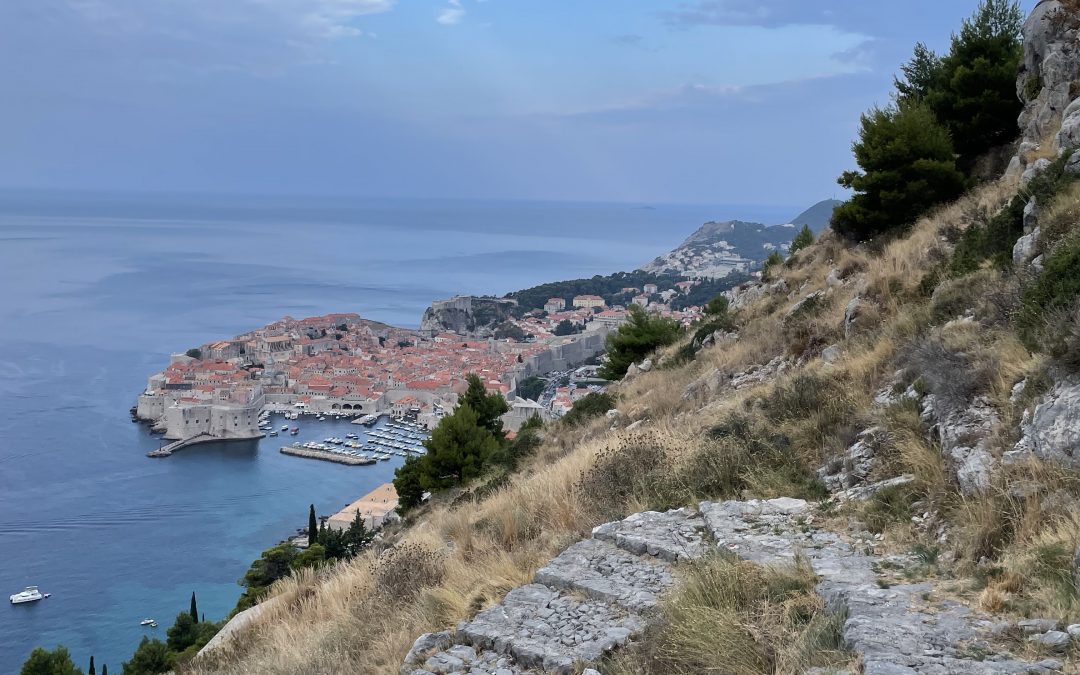 BEEEEEP.  My alarm jolted me awake at 5:45a.  A little jarring since I’d fallen asleep after 1a earlier that morning.  I’m normally someone who is early to bed, and the late hour was due to a 11:30p client call (because of a seven hour time change to the US).

But I was motivated to see the sunrise from the top of Mt Srd, above Dubrovnik, Croatia. This would be my only opportunity to do the hike and so I awoke.

I was moving slowly and finally at 6:21a I was out the door navigating the streets of Dubrovnik alone on my way to the trail head.

Even simply walking to the trailhead I had beautiful views including this beach area just outside of the old city. 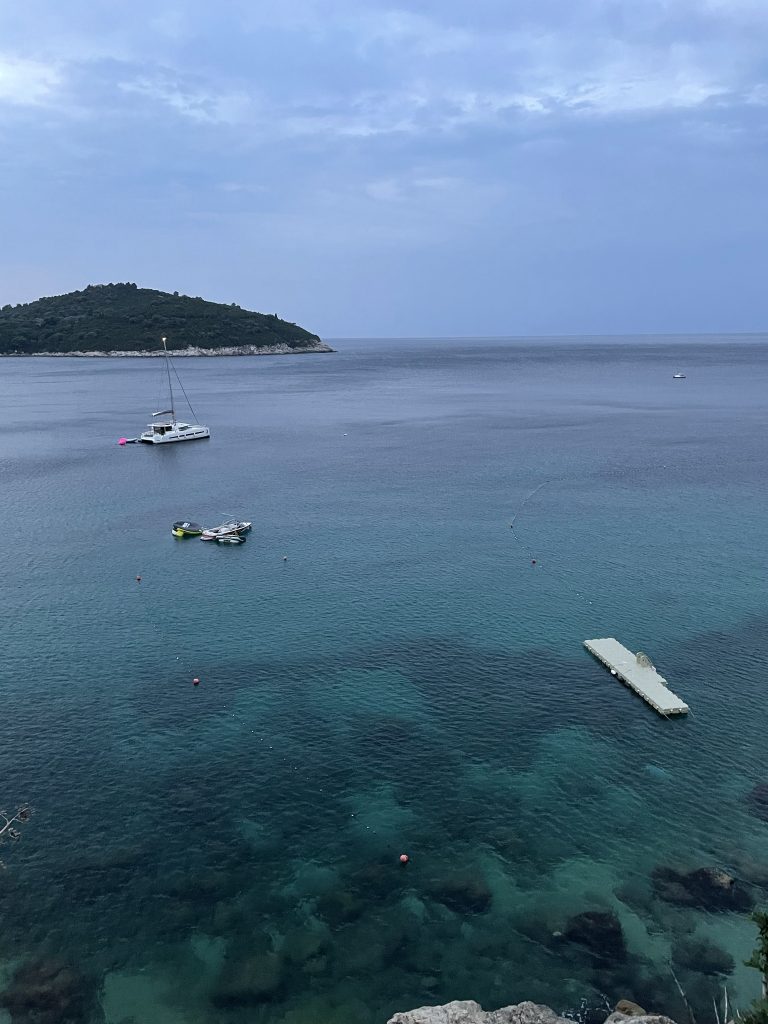 More beautiful views as I meandered down alleys en route. 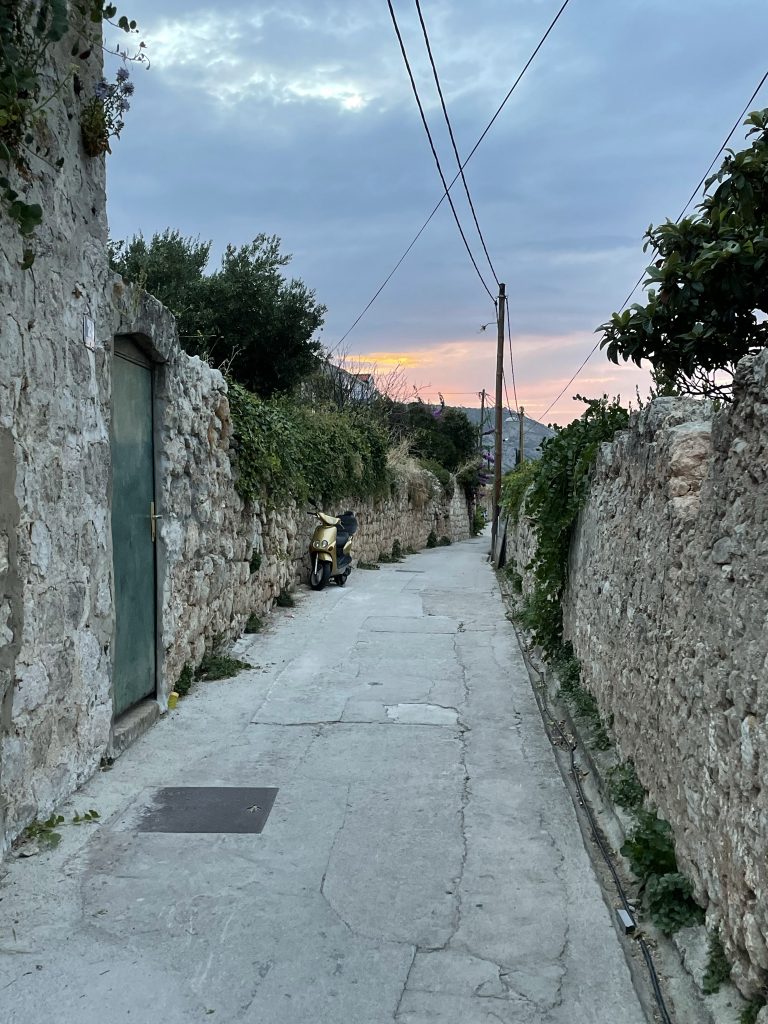 Then I encountered this.  So I had to pivot a little.  (Google maps is not perfect for these small streets/walkways) 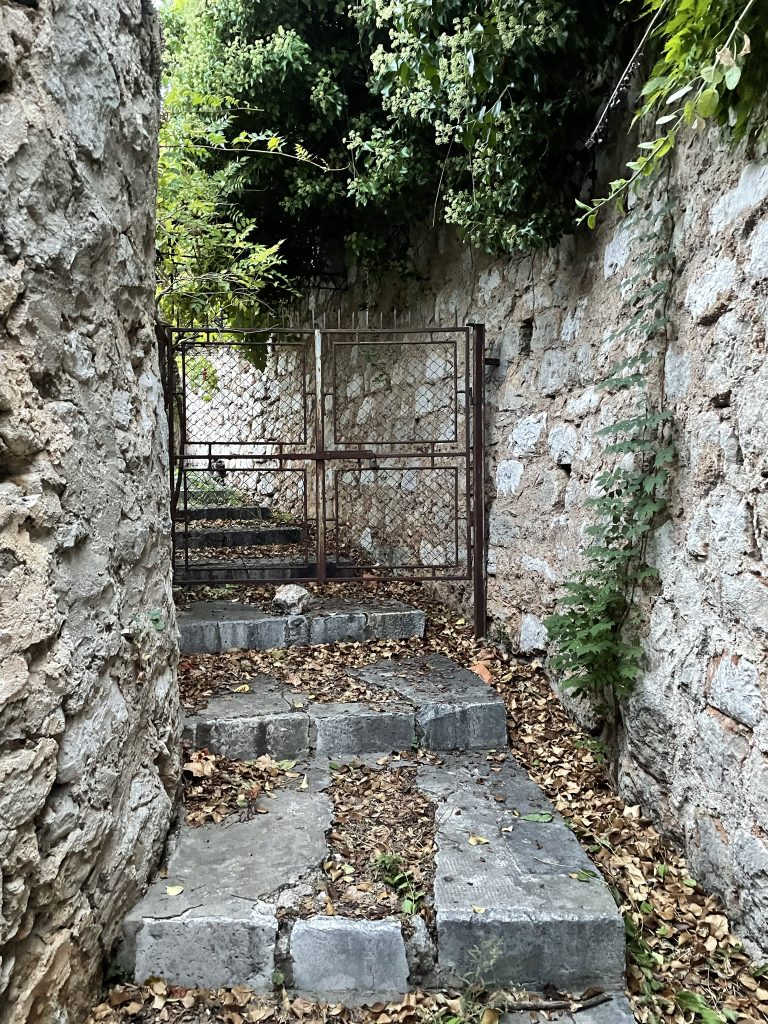 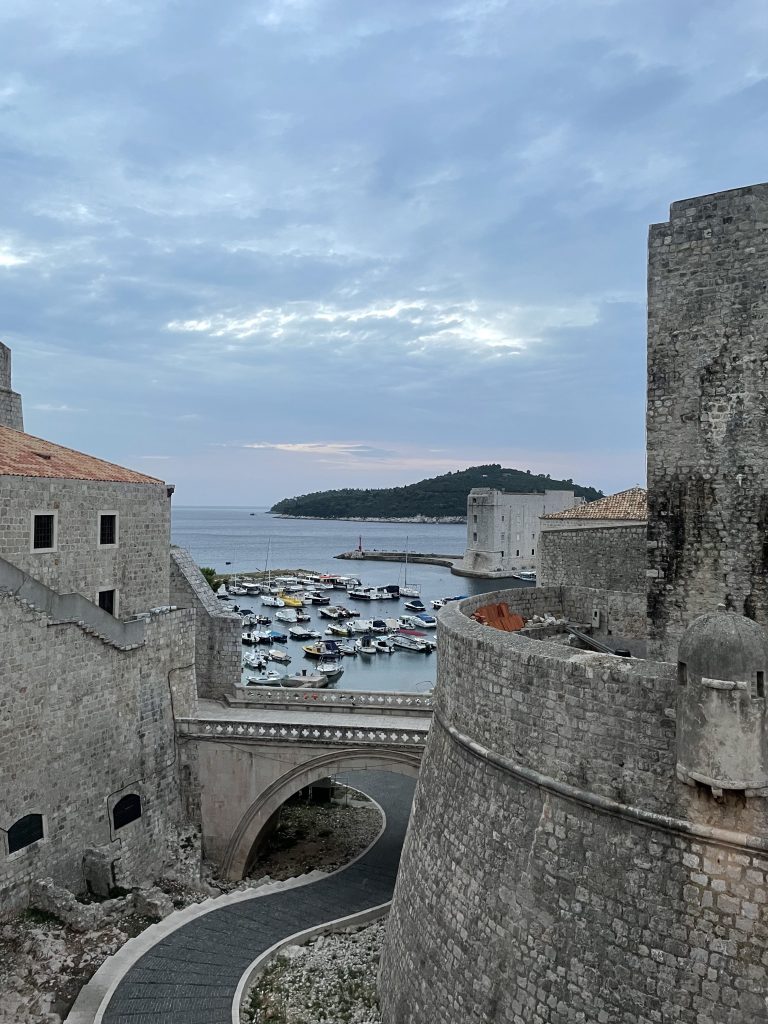 And finally the trailhead! 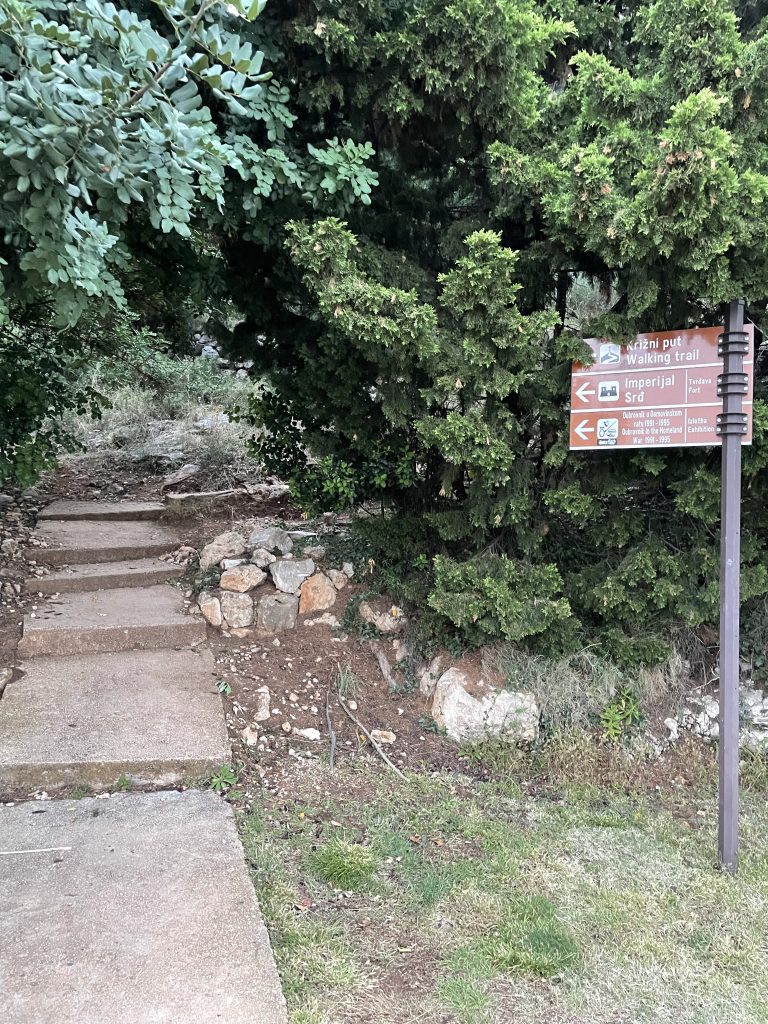 In retrospect I did not do enough inquiring about the terrain so for your benefit I took some photos so you can be more prepared than I was.  The path is rocky!  Sneakers that are more stylish than rugged are not the best option (that’s what I had).  Go for thicker-soled running or trail shoes. 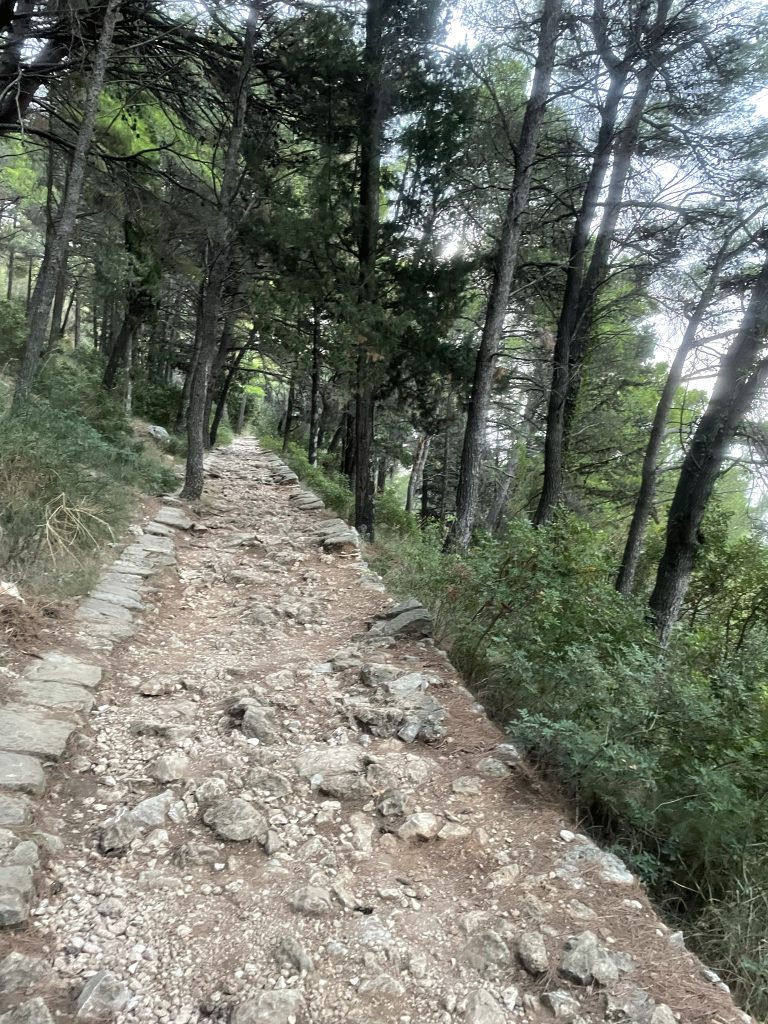 Switchback after switchback looked like this.  The colors of the sky were stunning. 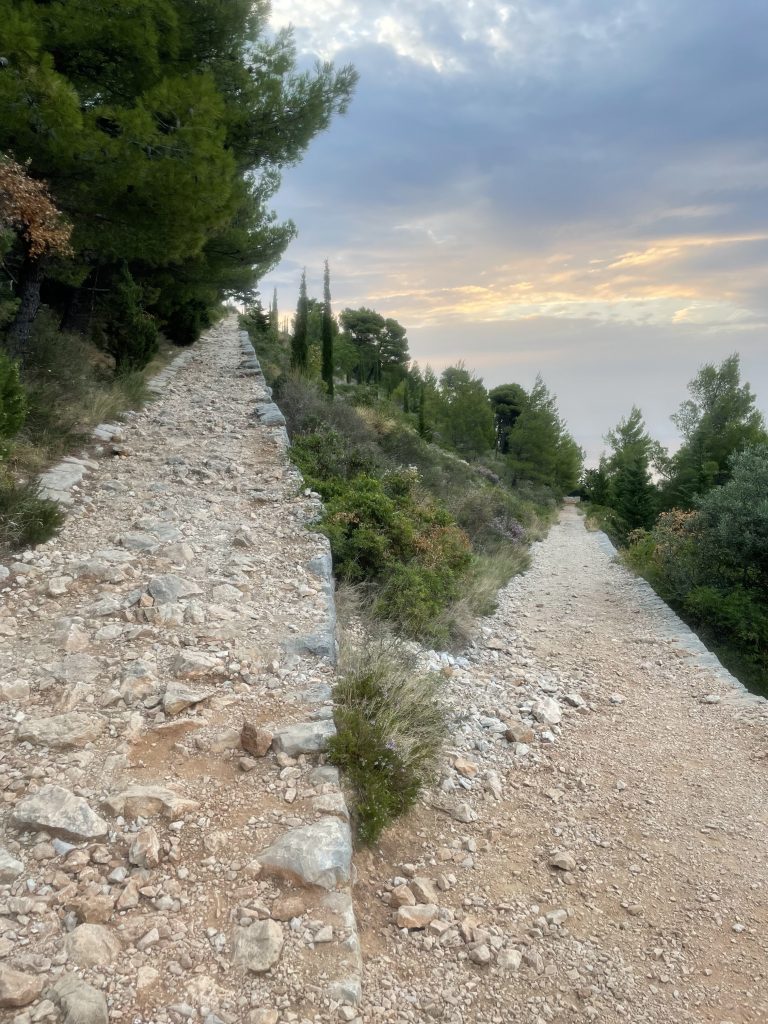 More beautiful views of Dubrovnik and the island just off the coast (which is a great destination for kayaking).  Note the cruise ship coming to port.  The really big ships can’t dock here.  This is a smaller Ponant ship.  But they do have an impact on the busyness of the town, so it’s best to work around when they are coming. 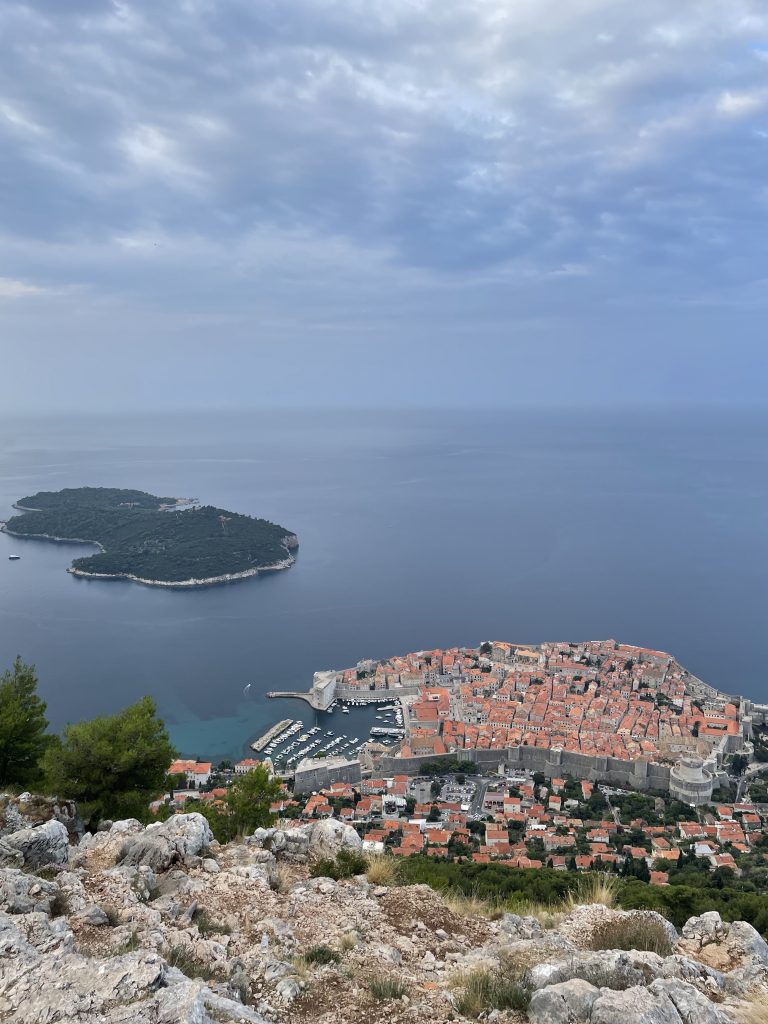 I made it to the top in 42 minutes, of course with stops for photos along the way.  I only saw one other couple during my hike up.  At the top is a fort that has an exhibit with artifacts from the war in the 1990’s.  It wasn’t open, so I wasn’t tempted to go in.

I also saw the 4×4 buggies I’d heard about (and put on my list of fun experiences for adventurous teens in Dubrovnik).  And then I reached the Panorama Restaurant.  It also wasn’t open yet, so I can’t comment on the food, but I can say the views are incredible!  Whatever the food quality is, I would certainly spend a couple of hours having a cold beer and something salty after the hike up. 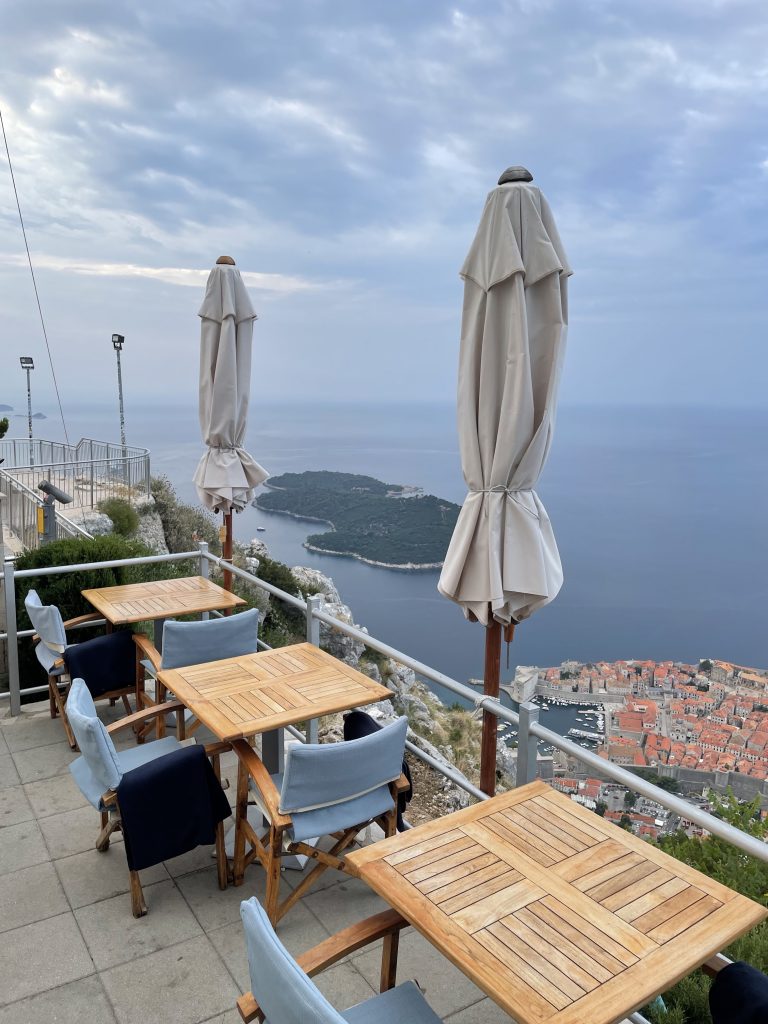 It’s worth noting there is actually a funicular you can ride up to the summit.  Similar to the hike our family did in Alyeska, Alaska this summer, you have the option to hike up and ride down.  Of course you can ride both ways, but what’s the fun of that?  I did for a brief moment consider a ride down, until I read it didn’t open until 9a.  It wasn’t even 7:30a so that wasn’t happening.

Before leaving the hotel I asked about walking the paved road back for my return trip.  The hotel staff didn’t recommend it, saying there was quite a bit of traffic and potentially a 2 hour walk.  That was not appealing.  However, I almost always prefer a new route to one I’ve already done, so I opted for the road, departing the top at 7:36a.

First bonus of that decision – I discovered they are in the midst of building a zipline on the crest of the mountain overlooking the gorgeous views.  I’ve added that to the list of fun teen experiences. 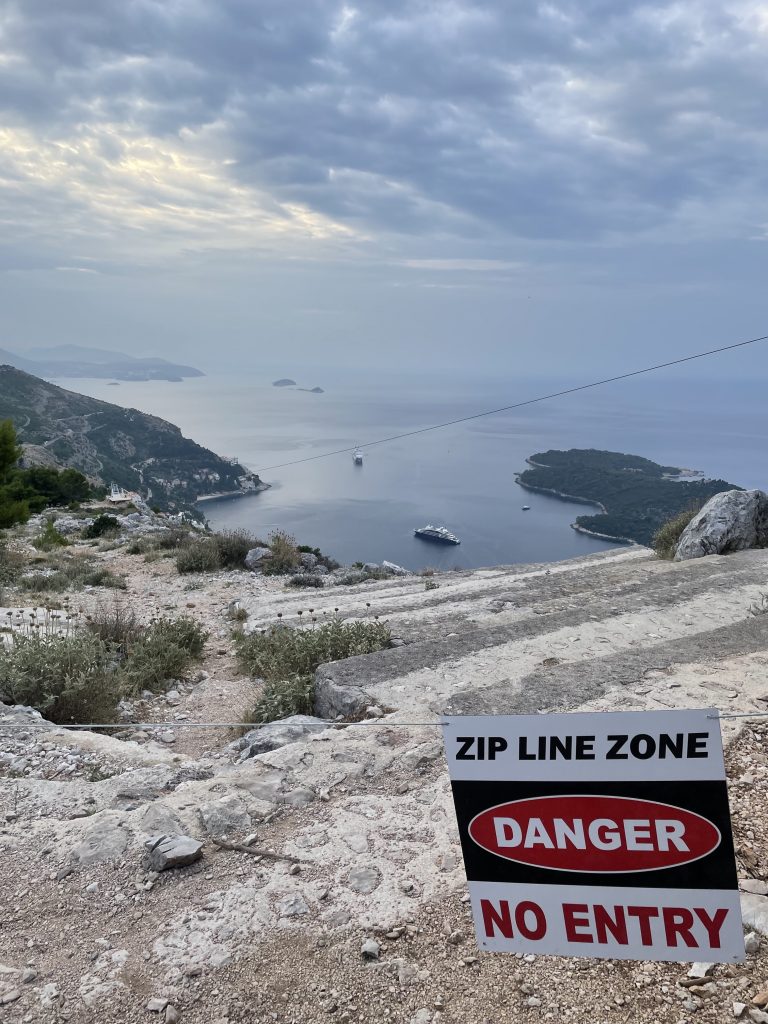 The section of the road I was on seemed like “the road less traveled” but I think that was more because of the time of day. 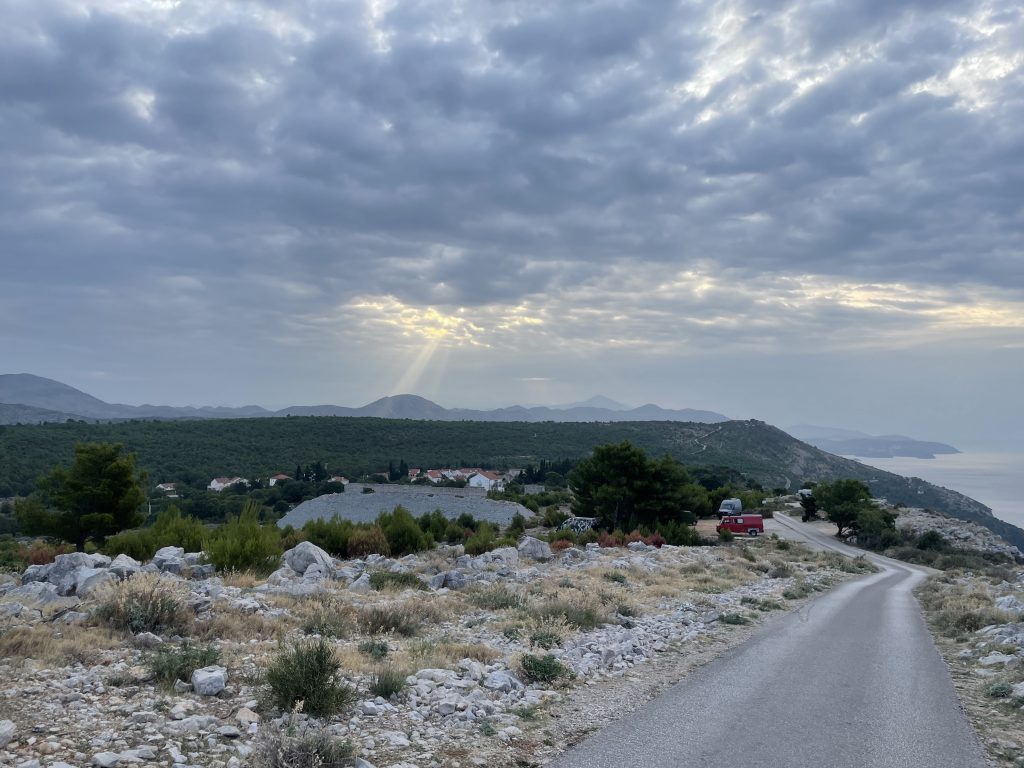 I thought I’d be taking the paved road the whole route back but then I encountered this sign: 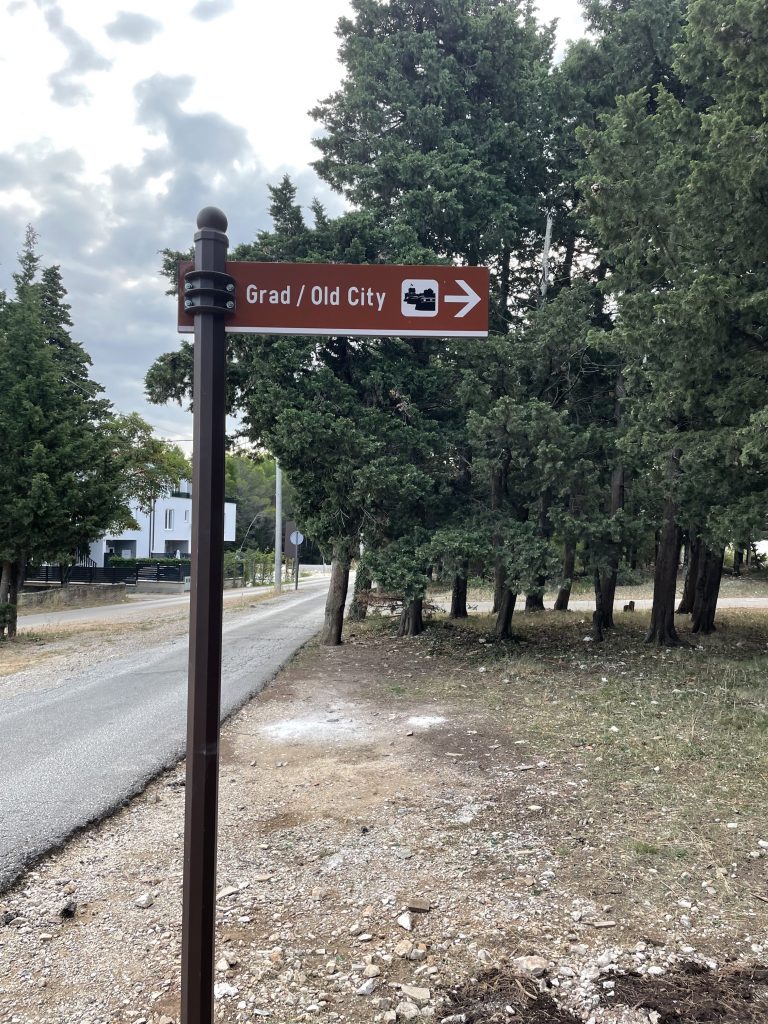 Given the Old City was my destination, I thought “let’s try it.”  As you can see the ground was much more even than my chosen route up. 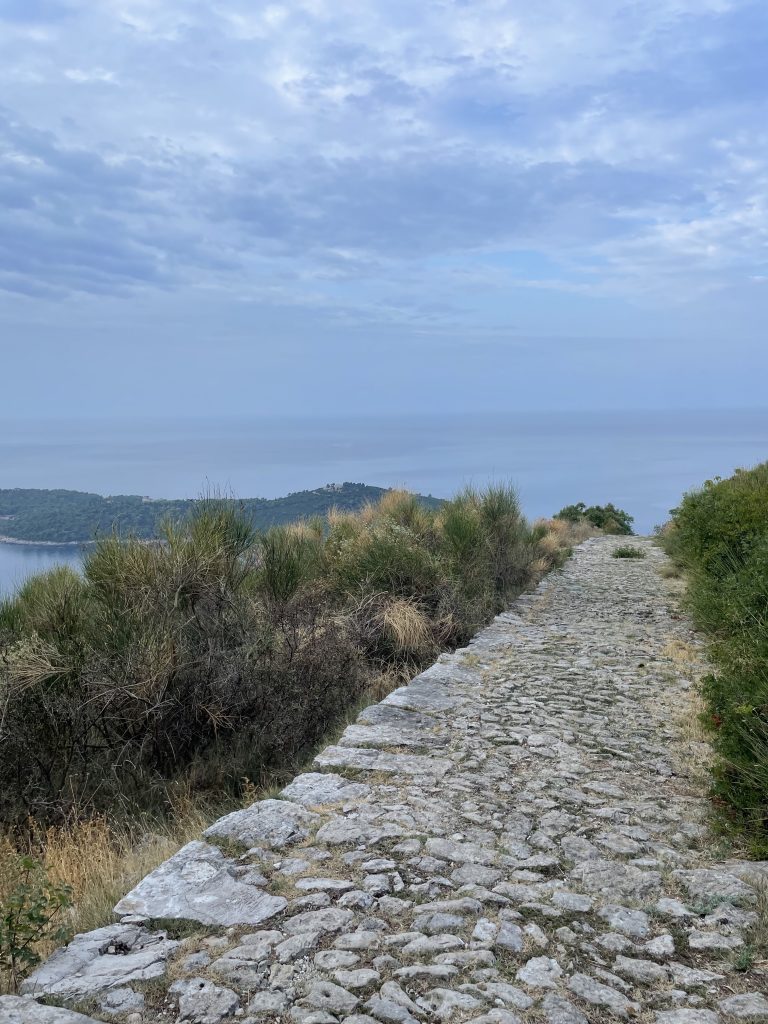 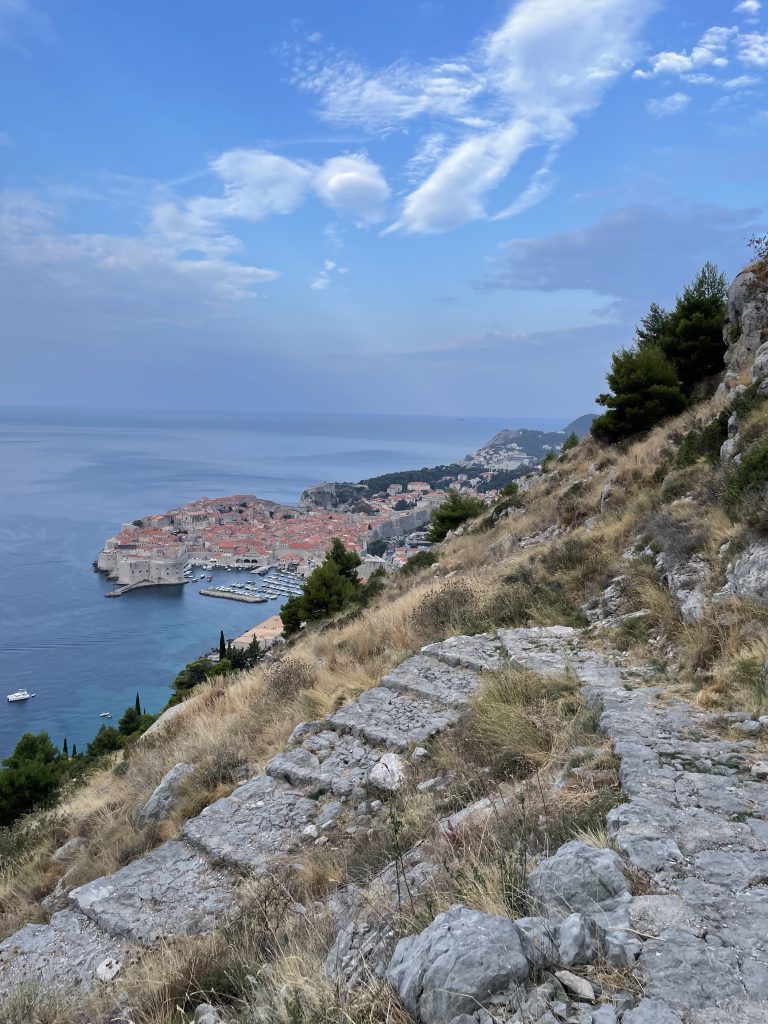 Then some civilization.  I immediately wondered how I was going to safely cross this very busy road, when I noticed there were stairs that appeared to be leading to a tunnel underneath.  Perfect! 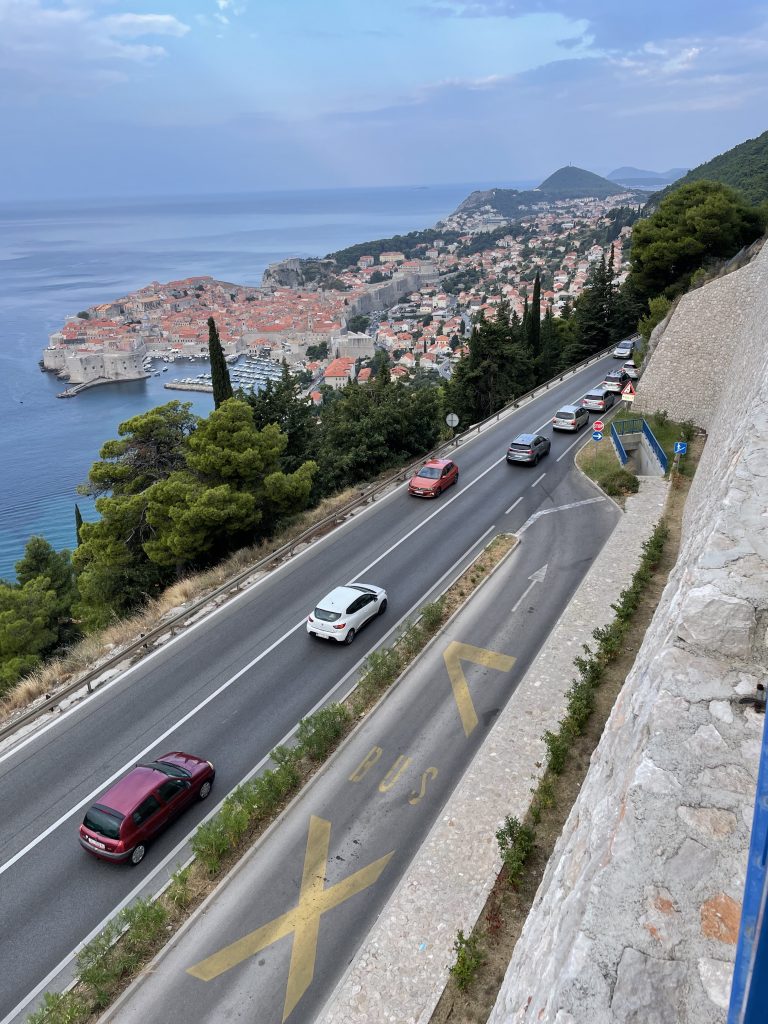 Popping out the other side to… 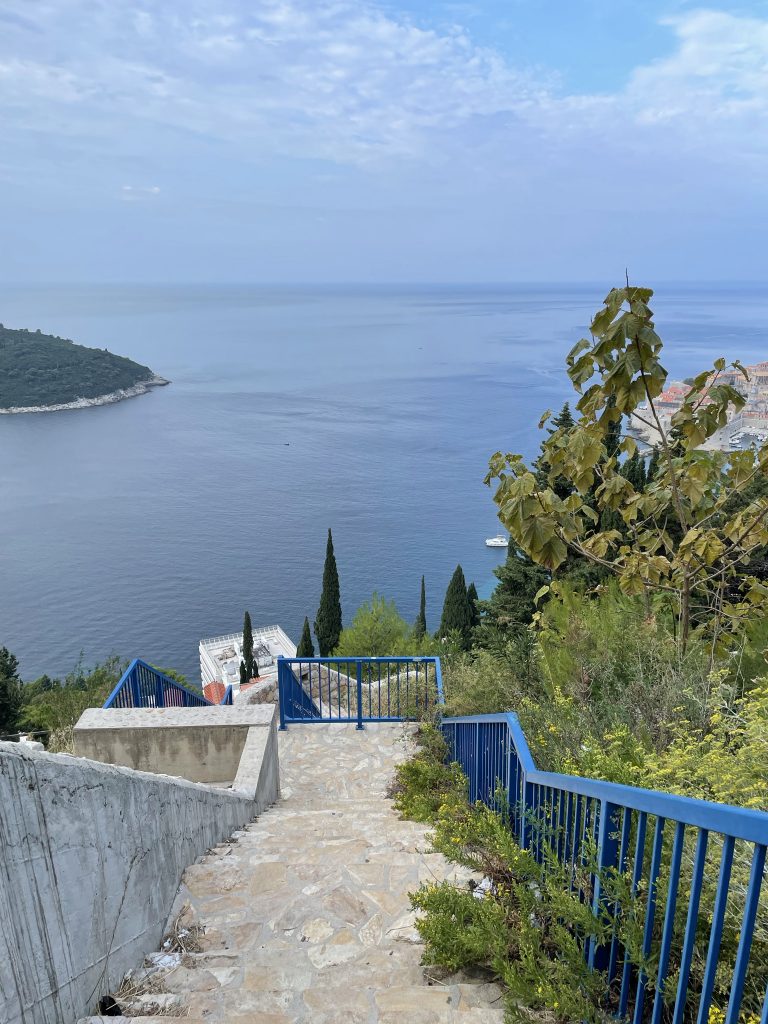 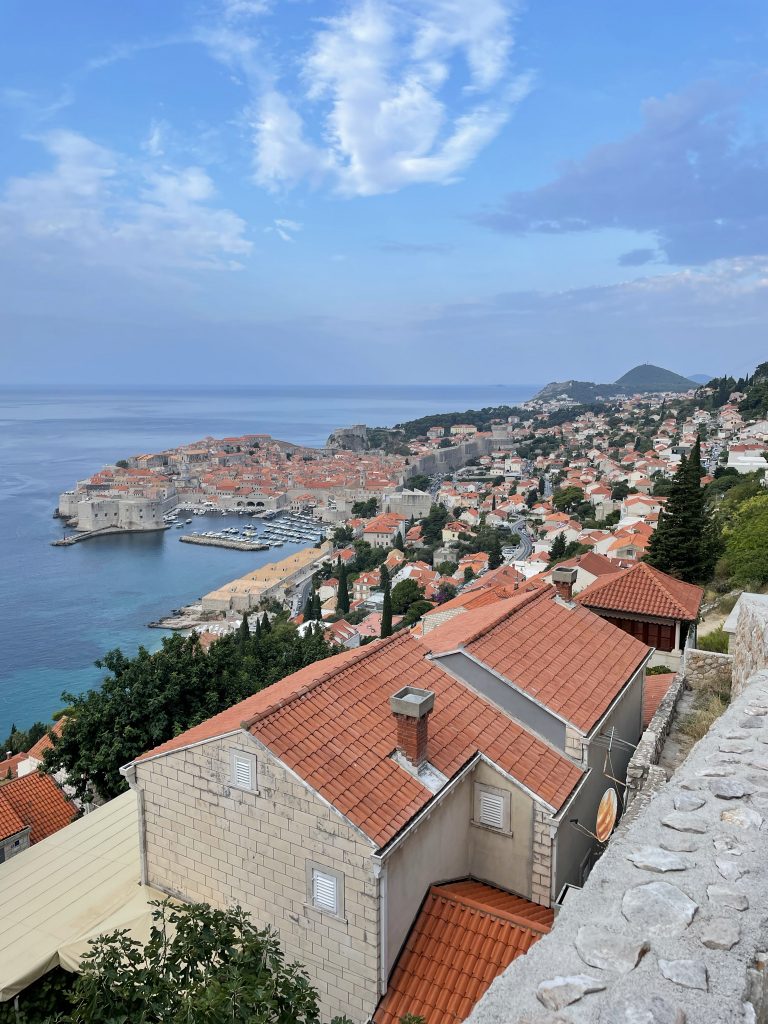 Then somehow I ended up on stairs that generally appeared like they were public space.  Which led me to a more rustic path that appeared to be a dead end: 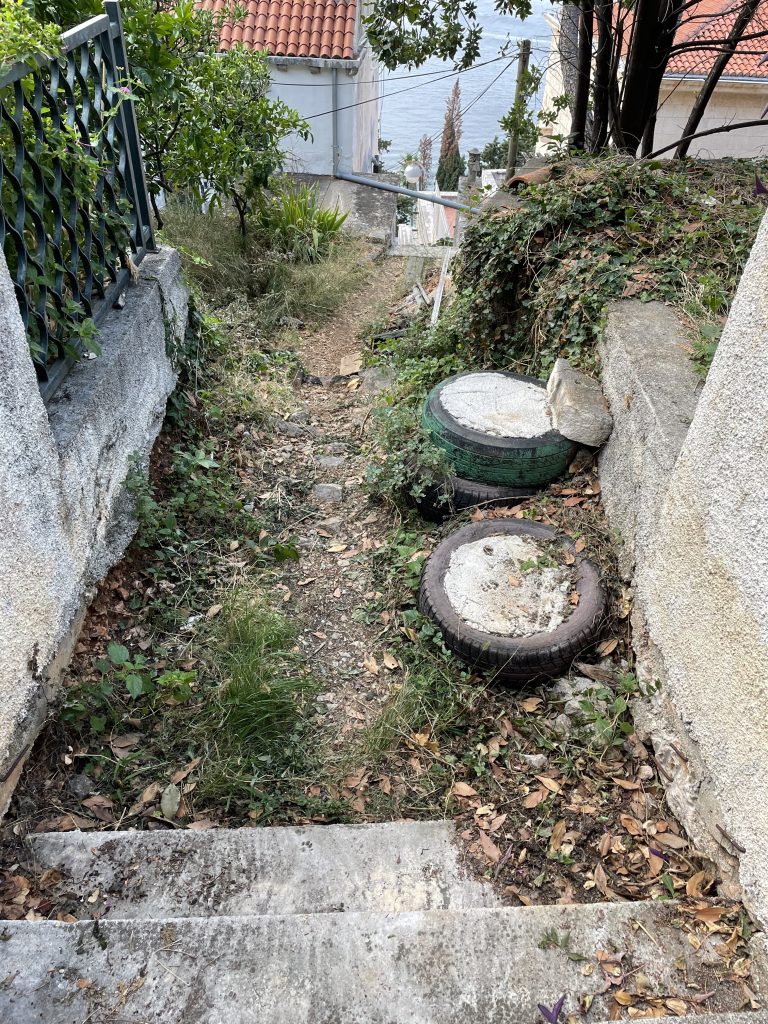 Until I walked up to the edge and saw this: 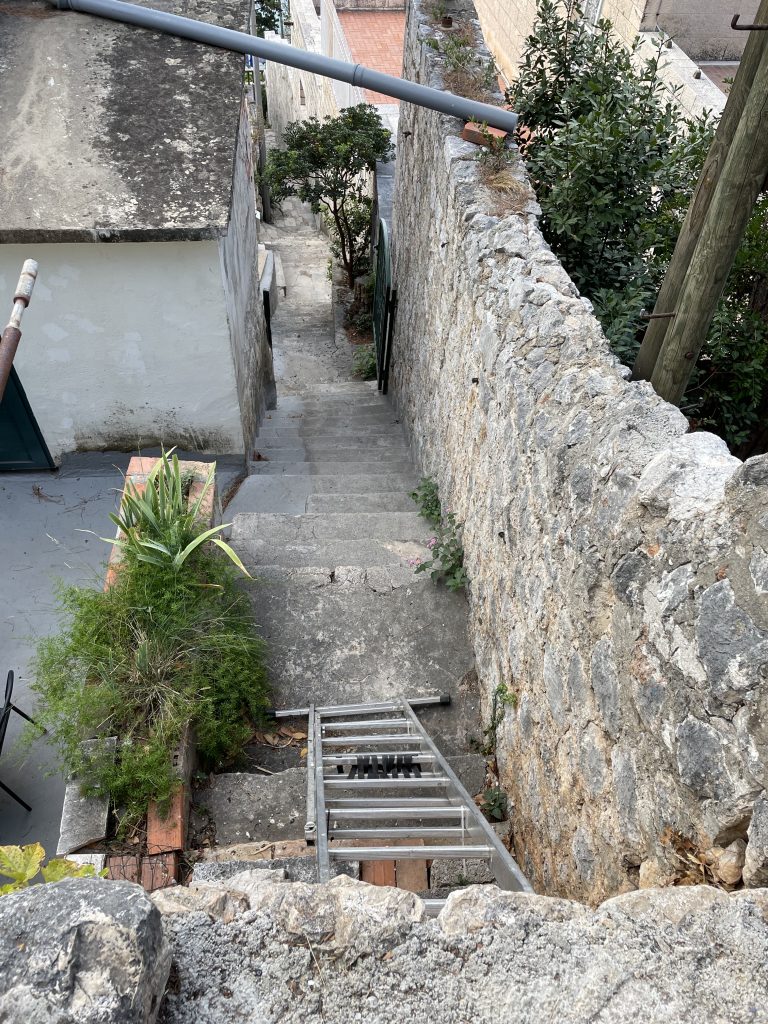 Hmmm.  Where am I?  Whose ladder is this?  Am I in someone’s backyard? 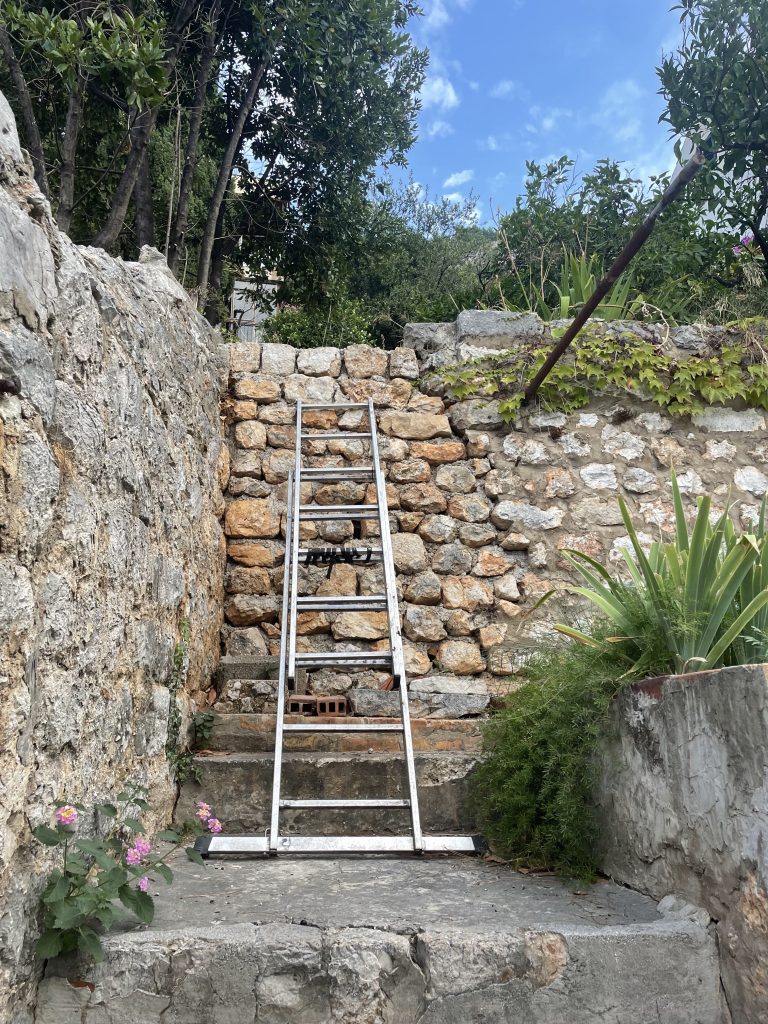 At 8:23a I popped out on the road that my hotel was on – just 30 feet away.  How I did that, I do not know.  Could I replicate it again?  Not sure.  But on this day it was one of my favorite kinds of adventures – I didn’t 100% know what I was up for but I figured it out.  I got in a great hike on a beautiful morning, soaked in stunning views, learned new things and made it back safely.

When you go to Dubrovnik, definitely do the hike to Mt Srd.  You’ll be slightly more prepared than I was, but I wish you an equally adventurous time!

Join our mailing list to be in the know about our favorite new travel finds and the latest travel updates.

Thanks for signing up! You should receive an email from us shortly (if you don't see it, check your spam).